The video above uses Google Earth to show where the Mae La refugee camp is situated and how big it is. 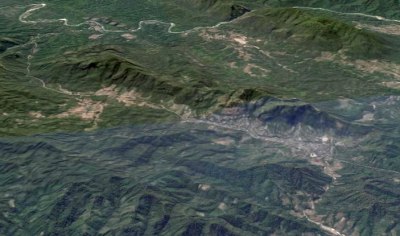 Mae La is the largest of seven camps along Thailand’s border with Burma (the country whose military dictators renamed Myanmar) these camps house over 140,000 people who have fled when the Myanmar military forces burned the villages, and committed atrocities which caused ethnic minorities (and especially the Karen people) to believe they intended genocide.

It seems a funny question to ask, and doubtless every camp is different, certainly the two we have seen were not the same as each other! Doubtless too among readers of this blog there will be some who’s ideas of a “refugee camp” may be as unrealistic as ours were before we went to Mae La. I can’t describe “refugee camps”, but I can describe our experience of one corner of one camp.

Many people arrive at Mae La on the main highway from Mae Sot the nearest town about 40 minutes to the south. The first time hopefully a contact will pick you up from the bus station, after that it is easy (except on the behind) to catch a “line bus” (a ute with bench seats for passengers either side of the luggage). At first the highway goes through farms, then as it climbs into the hills there are less and less people, and lovely forest on either side. Pleasant country, though not spectacular.

After a Thai Army checkpoint you start to pass the camp. The main purpose of the check points seems to be to “catch” Burmese citizens moving freely around Thailand without proper papers (i.e. to restrict the movement of refugees and illegals – there are checkpoints on many roads in the border area, not just near the camp). KKBBSC and its associated Baptist centres (like the home for landmine victims and the children’s “orphanage”) are at the far end, almost were the camp stops and the hill rises to Prayer Mountain.

Mae La is the largest in a chain of seven camps inhabited mainly by Karen refugees fleeing the Myanmar Military Government. The chain stretches along much of the length of the Thai border with Burma from the extreme north down to one east of Bangkok. The official figures are certainly an underestimate of their populations, since there are many reasons why some inhabitants of the camps do not want their presence officially known. The UNHCR figures cover only those people who have been granted official “refugee” status, something that sometimes takes years to achieve. According to the figures used by The Thailand Burma Border Consortium as a basis for the food and other resources they supply there were 38,923 refugees in the Mae La camp during March. All one can really say is that between 40 and 80 thousand people inhabit this camp.

It does not look like a town though, because the houses are not built of permanent materials (officially all buildings are of wood, bamboo and leaves). The line bus will stop several times along the camp, the longest stops will be the checkpoints, and outside the market. Officially there can be no market in the camp, since no one has any job or money. However, humans being what they are if you do have money you can buy almost anything you need in the market that isn’t there. A student managed to find me some blank DVDs to backup these videos, and others have got medicines they needed there too…

Driving past the camp in a private car takes about 6-7 minutes at 80KPH with a couple of places where one has to slow for checkpoints, which gives an idea of its size. It is long and fairly thin, squeezed between the road and the steep cliff that rises on the other side of the river. The camp is formally divided into “sections”, KKBBSC is in Section C. I can’t show you photos of the market or of the other sections, since our presence was unofficial we were asked to keep within the college area.

So, this refugee camp is like a huge village. But one where no one may have a “proper job”, though many weave cloth, or sell items from large windows in their houses, or teach or study… One where a minimum “ration” of food is provided and only a supplement can be grown, since there is little space for fields.

This ration is maintained only with difficulty, rising prices have lead the TBBC to announce on April 1st:

Update about TBBC rations.
Due to further budget restrictions, TBBC will have to make additional adjustments to the original ration reductions made in December 2007.

Food prices threaten refugee’s right to food
The current global increase in food prices is striking hard against people who are dependent on aid programs for their survival. Rice prices have risen by over 100% this year. To read more click here.

On food in the camp this section of the TBBC website is very informative, and gives a good idea of what is going on.

Lest anything I have said above give the wrong impression, and despite terrible suffering imposed by a brutal military dictatorship, seen most obviously in the bodies of the landmine victims, but glimpsed also in the fleeting mentions of not knowing “where my family is, we were separated when the army burned the village” and the like, or in the horrific pictures printed out from the Free Burma Rangers website of the treatment of “porters” (civilians conscripted as slaves and worked often to death by the Myanmar Army), the people in Mae La are cheerful, gentle, hopeful and kind. And, at least in Section C they have a deep and enduring faith in God – who else can they trust?